Have you ever noticed how contagious gratitudecan be?

I recently had the opportunity, thanks to the William & Mary D.C. Area Alumni Chapter, to welcome an Honor Flight coming into Reagan National Airport. On it were men and women who had served in World War II, Korea and Vietnam who were flown into Washington, D.C.sothey could tour the monuments and memorials erected in their honor.

All I had to do was show up with a smile; posters and flags were optional. William & Mary colors were encouraged. Turns out there were a lot of us who thought this was a great opportunity. It seemed like every other person in the security line was there to meet the Honor Flight. Green and gold mingled with red, white and blue was everywhere.

Patriotic balloon bouquets greeted us at Gate 38 as we gathered, and our numbers began to swell.Couples and singles, families with young children, girls and boys, teens and young adults, the middle-aged and older all swept into the mix. The chatter among us grew in connection andanticipation. “Their plane was early,” the gate crew told us, “so be ready.”

Suddenly, the brass of the Roger Whitworth Band brought us to our feet as they belted out the national anthem. And not only us, the volunteer greeters forming the welcome tunnel, but all the people in neighboring gate areas as well. We all stood in celebration of the anthem and saluted the flag in honor of our guests who would disembark any moment.

Then, all eyes to the jet way, a voice announces, “Here they come!” 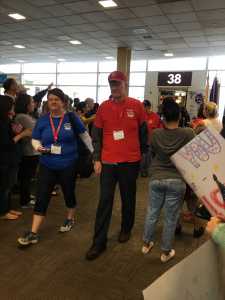 And so they did. How delightful to see the first to emerge, as he stopped in his tracks to take in the scene. With a sincere bow, he waved and smiled as he was ushered along the runway like a New York City model. Cheers rang out, salutes were given, whistles and thanks heard. Thunderous applause.

Then the next and the next. Each one receiving their welcome in their own way. Some were gregarious like the first. Some looked down as if embarrassed. Some in wheelchairs, some with walkers, some with canes. Some sprightly, shaking hands. Some jovial, smiling broadly. 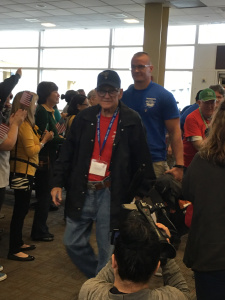 Many, really most, were slow and deliberate.Each red-shirted veteran walked with a blue-shirted companion whom, I learned later, had been assigned to accompany them on their day. Some companions pushed the wheelchairs, held hands or walked behind to be sure of balance, but many wielded cell phones, video-recording the events making a lasting memory for their patrons.

From my place among the left flank of greeters, I was mesmerized by the glory on these faces. These men and women who had served their country proudly in ages past wore age and beauty, character and wonder, delight and surprise. Not many of them, I supposed, are wealthy executives, judging by their demeanor and their dress. They had just flown several hours in anticipation of visiting memorials where they will remember friends and comrades gone and recall experiences they may have long ago chosen not to remember. Yet, I watch them in utter amazement. Some weep or choke back tears of joy. Most wave in acknowledgement; some applaud back to us! 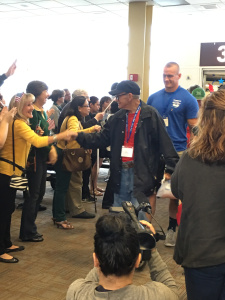 As theymake the turn toward the concourse I realize that time has stopped in that corridor. Not a soul is moving in all of Terminal C. The crowd blocks the width of it, andnot a soul complains. Continuous applause rings out.

The ranks of our hundred or so volunteers are now buffeted by the per-chance traveler out of Washington D.C. on a Saturday morning. All those, too, are now gathered around Gate 38 to see what the fuss is about. There is a small child hoisted up on Daddy’s shoulders to get a better look. Beyond her, a TV screen shows news that no one is watching. 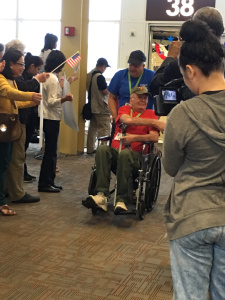 Our attention is center stage until the last, a veteran of World War II,makes his rightful way along the imaginary red carpet and is wheeled through the throng on his way to the bus and the mall and the memorial.

Roger Whitworth and the boys in the band hold their last note and applause swells and then tapers.Over the intercom, an announcer closes the festivities:”One hundred and fifty reasons why we are free today.”

Hands numb from clapping, with smiles affixed, and bidding fond farewells to newfound friends, people turn to go about their days. What an amazingmomentwe have just witnessed. We came towelcome andhonormen and women for their service, and they applaudedback to usjust for being here.

The post 150 Reasons Why We Are Free Today: Gratitude Flash Mob appeared first on Today I Saw God.