Thank You, Bennett, For The Way You Played The Game - Floris United Methodist Church There’s nothing quite like playing a game with a kid. Pull out the equipment; explain the rules and you’re off!

When they’re small, you may need to correct them, re-route them, or help them a bit. As they grow, you may show them a few tricks and, every now and then, have to caution them when they get too rough or bend the rules in their favor. But somewhere along the way, if you’ve played your cards right, they start teaching you new ways to play the game. That’s when the game becomes theirs. 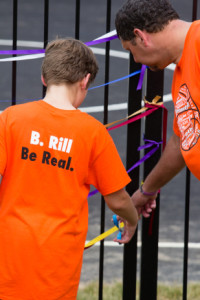 Two years ago our church experienced a terrible tragedy in the death of 14-year-old Bennett Rill. A fewweeks ago we christened a basketball court in his memory. Of course, you don’t christen a basketball court with a bottle of champagne, you cut the ribbons and play 3-on-3, as hard as you can, then shake hands, and go have some refreshments.

A bunch of us sat on the hillside to watch and cheer the competitors. Benny t-shirts were everywhere. Derick, Bennett’s Dad, was working the crowd, shaking hands and slapping high fives while Mom Carolyn was receiving congratulations and thanks for a day of community basketball that was truly a celebration of their son.

I’m wondering how this family does it. They have experienced something no one should ever have to go through, and they’re honest about how it’s going.”Bennett is still gone and our pain remains as sharp as ever,” Derick offered in his opening remarks.

Each day is hard and it isn’t getting any easier. They’re not pretending otherwise. Thank God! This family is living their mourning among us in order to help us all deal with this loss. Most especially the young friends of Bennett’s as well as his teachers, neighbors and teammates.

The Rills, in their great compassion, have created a living, working, playing place where they can gather and remember Bennett in the way he would have wanted.By playing the game he so loved, in the way he loved to play it as hard as you can until you’re completely spent and then go have a cold drink and remember the three-pointers you drained, and the lay-ups you can’t believe you missed.

The court was built with some of the funds donated to the Bennett Rill Memorial Fund for Student Ministries, the rest of which will support 6th 12th graders at Floris to bring in speakers, sponsor events, send them on trips and support them in mission work. But the court speaks fellowship. It beckons kids of all ages to come play on it, come enjoy each other’s company and come get to know why it was built in the shadow of a church.

That’s the thing about a game. It invites you to play. 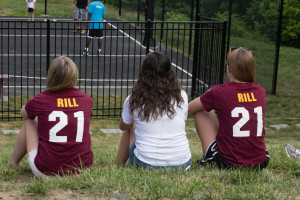 This court, with the number “21” painted in the far corner, memorializing Bennett’s favorite spot to shoot three-pointers, isn’t a sad place to remember loss, it’s forever game day, to remember victory and a remarkable young man who left us way, way too soon. But not before he showed us his love for God, family and friends and his fearlessness to share that. He was the “real deal.”

As I watch Derick and Colin cut the ribbons that bar the entry to that court and welcomeit’s first “official” competitors tothe championship game with high fives all around, there’s no sadness on any face, just pure delight. They’re here to play “Holy Hoops,” as Derick would say. He has opened the gate. The Rill family hopes that court will get lots of use in the days to come and become a place for kids to congregate, get to know each other and themselves better. They’ll play some games of “H-O-R-S-E,” which on this court is re-named, “J-E-S-U-S,” and in the process they’ll come to knowHim in fun, fellowship and the spirit of competition.

I can just imagine Bennett, who’s spirit is surely more alive here than ever, asking his buddies if they want to come shoot some hoops over at his house and giving them the church address to meet up. Bennett wouldprobably greet them in the parking lot, usher them down the hill to this treasure of a court and then beat them with a shot from “his” 21-spot at the imaginary buzzer.

After they’d exchanged high fives, Bennett would smile and wait for the inevitable question.”So, Benny, where’s your house?”

The post Thank You, Bennett, For The Way You Played The Game appeared first on Today I Saw God.