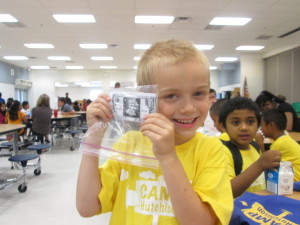 Students earn “Hutch Bucks” during camp and on the final day can spend them at the fair.

“Welcome to Camp Hutchison! It’s going to be an exciting first day for all you kids! My name is Hutch, and I will be helping you make new friends!”

When working with children of this age, that’s the kind of language you must use, and there was a lot of it this morning. Camp Hutchison began July 8. There are close to a hundred kids attending this year, with half as many volunteers here. On the first morning, everything is a whirlwind of activity as the volunteers scramble to unpack bins, organize classrooms, and figure out exactly where all the children entering the building should go. Apart from Camp Hutchison, there are several other camps that are using the school building. Some kids who showed up weren’t on the roster for any groups. However, we found a place for them in Camp Hutchison. We’re working hard to keep improving our system and make changes to the attendance records, among other things. The stage for the puppet show wasn’t readyfor use today, so we made a temporary puppet stage in the theatre for the first day of the Camp Puppet show, starring Hutch, an orangutan and the camp mascot. There’s an air of childish excitement in all the volunteers, students and adults alike, as the most exciting four weeks of the summer begin.

The office for Camp Hutchison is called “Command Central.” Calm is a thing unheard of, with Sarah and Mary Frances, the camp interns, running every which way to assign jobs and solve unexpected problems. Collectively, we lovingly call them “Sarah Frances.” There have been a few unexpected events so far, what with this being the first day. Difficulties are to be expected at the beginning of camp, but frankly I was expecting more. So far, we’re off to a smooth start. While the kids aren’t bubbling with excitement at being back in school again, they seem to be cautiously growing more comfortable with their counselors and activities.

All the volunteersCounselors, teachers, food servers, interns, and assistants allhad their mission briefings and are prepared for anything. Camp Hutchison is under way.

The post The First Day of Camp Hutchison appeared first on Today I Saw God.