Editor’s Note: This week some of the high school students from Floris UMC are in Costa Rica serving on a mission trip. This post was submitted by one of the students on the trip.

I woke up to one of our leaders, William, asking Matt and I if we were asleep or just resting our eyes. Our inability to form coherent words or exhibit any evidence that we were intelligent life forms was apparently all William needed to realize we weren’t even close to being awake or functional, so he stirred our reluctant selves out of bed.

Breakfast was pre-mixed rice and beans, scrambled eggs, toast and an assortment of fruitseverything we needed for a long day of service. Oh and I forgot about the coffee! Best coffee I’ve ever had. I drank about three cups. After everyone cleaned their dishes, Ashley announced to the group that we would be headed to the church down the road for the morning.

I was a part of the group that would be doing detail work on a bunch of benches under the pavilion. Our job was to remove the padding along the back rest of the benches, pry out any remaining nails or other hazardous protrusions, and sand down the whole bench with these awesome power sanders. Removing the padding was actually pretty awesome. Once you’d make a little incision to get it going, all it took was a series of yanks and pulls to get the bulk of the padding offwhich was an awesome way for us guys to prove how macho we were. The hardest part was getting all the individual nails, which kept the padding secure, out of the wood. To give you a reference of difficulty, I was feeling triumphant after removing three nails in like 40 minutes. It wasn’t this tough for everyone, however. Wes Coleman found a paint scraper and a blunt piece of metal that he used kind of like a hammer and chisel and cleared a whole bench (probably 50+ nails) in about 30 secondsemasculating every guy there. 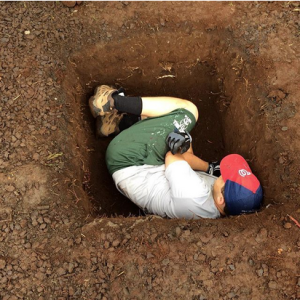 After a solid few hours of work, we stopped for lunch. We had about 45 minutes until the food would be ready so I snuck out to the super secret shower that Matt #2 told me about, despite not even being that dirty. I came back all clean and smelling nice to find Brady pretty much covered in dirt (he’d apparently took a nap in a hole he’d dug). Brady explained that he didn’t really have time for a shower which made me feel kind of bad for taking a shower without at all needing one. I didn’t actually feel badthe boylaid down in a hole.

After a lunch of mashed potatoes and meatballs, Ashley announced that there had been a change of schedule.

“We will not be having Vacation Bible School this afternoon.” A plethora of “whaaatttt”s and “noooooo”s filled the room before Ashley could explain that this was not, in fact, Armageddon. She simply explained that, because of a slight drop in registration, we wouldn’t begin VBS until Wednesday, and we’d spend today and tomorrow going around the village to give families rice and beans and encourage them to bring their kids to VBS on Wednesday. Additionally, we’d arrange an impromptu game of soccer out on the field outside the church for any of the kids that wanted to comenot an awful way to spend the afternoon.

The highlight of my afternoon was when Josh stepped up and used his Spanish to explain the rice and beans to the first family we came across. After everyone, including the matriarch of the family, had stopped laughing, we prayed for the family and moved on.

After a scenic bus ride back to the compound, we unpacked and everyone split off to spend their free-time. I, personally, spent the couple hours before dinner reading and napping. Others played cards, basketball or gave the two family dogs a bath. Dinner was a differenttype of rice and beans, as well as chicken and some kind of vegetable that I still cannot place.

After dinner, we had about an hour before program, so we played a quick game of sardines (basically reverse hide-and-seek). Matt, Jacquie and Alexa led us in two songs before we split into small groups to talk about our day. After small groups, Ashley gave a message about Isaiah and the theme of the week, recklessness. After one last song, we had a little bit offree-time before lights out.

The post Monday in Costa Rica appeared first on Today I Saw God.