We knew they were coming. The group of white supremacists had been issued a permit to gather in Lafayette Park, on this, the one-year anniversary of the “Unite the Right” event in Charlottesville. At their 2017 gathering, Heather Heyer, a counter-protester, was killed, while others were physically injured and their city was left scarred and deeply saddened. Now they were coming to Washington, D.C.

A call was initiated by the Baltimore-Washington Conference of the United Methodist Church to respond to the white supremacist rally with a rally of our own. I’d heard that there would be a group from Floris UMC going. Something inside inclined me to sign up.

Let’s be clear: I am not a very brave person. I am no risk taker. I am not foolhardy. I have never stood before the barrel of a gun, never truly feared for my life, and certainly never placed myself intentionally in the presence of someone I knew would be spewing hatred, shouting racist epithets or chanting anti-Semitic slogans. (Heck, I don’t even like the unruly crowds at Redskin games.)  All of this swam in my mind as I boarded the Floris UMC bus to head downtown.

There were 12 of us on that bus: 10 courageous women, one pastor and bus-driver extraordinaire and me. During the ride down, organizers of our group delivered our “marching orders.” In case we were confronted by hostile protesters or situations that posed harm, we were to defuse any altercations, assist anyone subjected to harm and were not to engage any form of hatred. Our job was to sow peace, the peace of Christ. But, just in case something untoward occurred, we arranged for an alternate meeting spot, shared phone numbers, and signed into event alerts. Maps indicating the nearest metro stations were distributed, just in case we couldn’t get back to the bus.

This, you might imagine, did not assuage my fears. There I was, sitting in the back of a church bus, apparently headed straight into what might be harms way.  I sat pretty quietly during that ride in spite of the lively chatter which surrounded me. This was a pack of peacemakers with a purpose! I was completely out of my league.

The plan was to collect for a pre-march pep rally at Christ United Methodist Church, so after Rev. Bob’s miraculous parallel parking on DC city streets, we poured out of that bus and onto the sidewalk to head to church. First, prayer. Circling to hold hands, Sara Greer even convinced a group of kids walking our way to join us. All prayed up, we headed to church where we were greeted warmly, welcomed magnanimously and inspired by word, song and fellowship. They handed us a lunch – our last meal? – as we gathered behind the banner to begin our march.

Our police escort immediately surrounded us. They proceeded to stop traffic, so this little band — multi-racial, multi-ethnic, broad-ranging in age and mobility — could all find its way safely. As we spilled onto the grassy lawn of the mall, instead of the hatred, weaponry, and harsh words I feared, we were greeted by nothing but love. A beautiful stage had been erected right in front of the Capitol building, its banner announcing our common purpose: United to Love.

Kicking off this rally, Bishop LaTrelle Easterling told us, this was not a meeting of counter-protesters. In fact, it came about in response to a request directed to the bishop imploring her to lead the effort to deny the “Unite-the-Right-ers” permission to rally. “Absolutely not,” she told them. “If we take away their rights, they will have the right to take away ours.” Instead, we will rally under this banner. Not as counter-protesters, shouting down hatred, but as representatives of a force stronger than hate, because, as Dr. King said, “Love is the only force capable of transforming an enemy into a friend.”

United to Love had a permit, too — for the mall, not Lafayette Park, thank goodness! I would not be standing eye to eye with white supremacists, but surrounded by love in all colors and denominations. Relief! I even saw a bit of humor in this. As we staked out our place on the grass, we were instantly dive-bombed by dozens of large flying bugs that resembled dragonflies. One in particular hovered so close to me and held me with such intent focus, I imagined him a dragonfly-drone collecting data on this new species of    Invader. I waved a happy so-long, as he buzzed off. 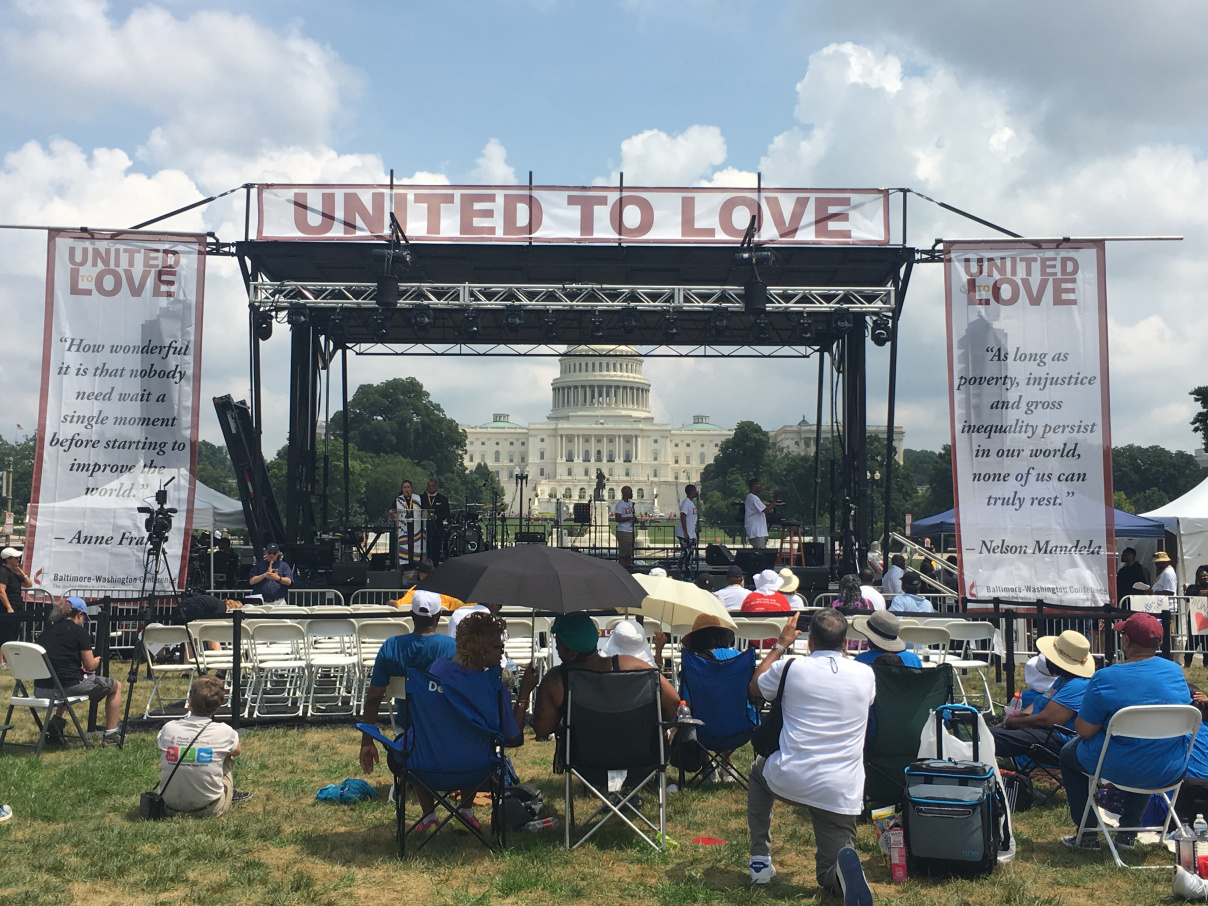 Then I settled onto a borrowed beach blanket to enjoy the spectacle: song and word, prayer and praise, fellowship and message. A rally it was, to God be every bit of the glory. Yes, we knew that hatred and bigotry was gathering just a few blocks from us but we couldn’t hear them and we couldn’t see them; it was only from news reports via digital media that we heard they were there. Instead we were focused on the future, on ways that moved us forward, on a path we could chart together. We, a diverse group of interfaith worshipers, gathered in support of our common humanity and each other. That, I felt sure, was not what was happening in Lafayette Park.

Then the funniest of thoughts creeped in. What if all the dragonflies really are drone-spies sent by the “Unite the Right” rally organizers to report on that “other rally” down on the mall? I wondered what they’d think of what was being shared here: messages of hope, commitment, and unconditional love, amid preaching and teaching affirming that we, in our diverse array, are each expressions of a God whose nature is love.

OK, now that I’m relaxed and amused and my life doesn’t feel quite so endangered, this out-of-doors praising God inclines me to worship with a bit more abandon — to raise my hand in affirmation, clap my hands in rhythm and raise my voice in response. I’ll be honest, I feel way more free to really worship here than I feel inside a Sanctuary on a Sunday.

Our times make it clear that now is the time we need to raise our hand when we see injustice and raise our voices to stand against it. From Micah 6, we take our marching orders… what does the Lord require of you?

As I look behind me and scan the gathering of the faithful around me, a peace that passes understanding settles over me. The trepidation I came with is gone. No, I’m not a risk-taker by nature, but I’m no standby-er either. I rise to wander through and greet a few folks, but mostly to snap photos of the amazing expressions of God’s mercy, love and justice, on display right there on the D.C. Mall.

How proud I feel to have marched behind the banner which is now draped over the fence with the Capitol building as backdrop. Midway through the rally, as the afternoon sun beats down on us, and most of the crowd have taken shelter in the shade to right or left of the stage (but not the hardcore like us!), Dr. David McAllister-Wilson, President of Wesley Seminary addresses those gathered. He wonders to us, What is Unite the Right? How are they right? He concludes that they have gotten it confused. Not unite the right, rather, unite the righteous. “Peacemakers who sow in peace raise a harvest of righteousness.” ~ James 3:18

Many speakers refer to the distinction between our rally and that of “those gathered a few blocks away.” It starts me wondering if our times are something like the day in another capitol city, Jerusalem, some 2,000 or so years ago when there were also two parades. Along one parade route people shouted Hosanna and waved palm branches, welcoming Jesus riding humbly on a donkey. Along the other rode Pontius Pilate, Roman governor of Judea, adorned in his imperial majesty. One rally peaceful, one rally proud. The peaceful not a counter-protest but a different message, entirely.

Sometimes, when we as people who are not brave, not risk-takers, and not particularly well-suited to diffuse differences or sow peace, let the God of love drag us up out of our pews into our nation’s capitol on a Sunday, we are forced to see and hear what is going on in our day.

I marched and rallied on Sunday in order to magnify the message that Jesus reverberates through the ages: “faith, hope and love. But the greatest of these is love.” Love is the eternal answer to the toughest questions of every age.

The question that remains: what will the followers of Jesus do with the message of love? We’d best be love.